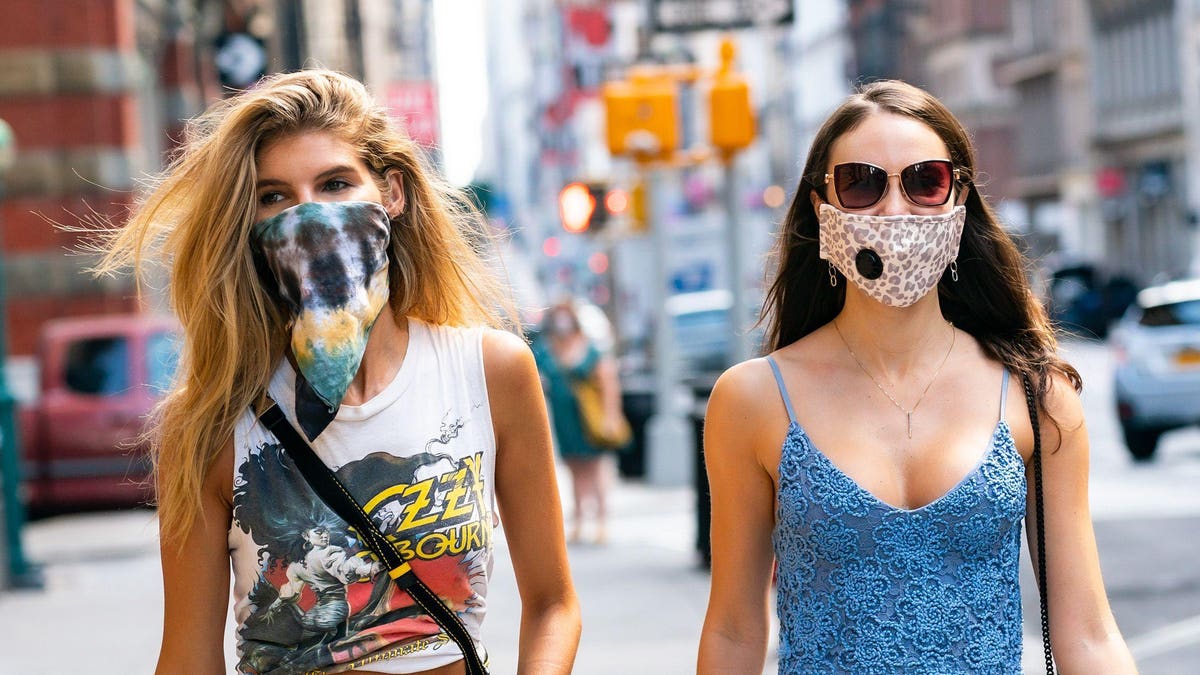 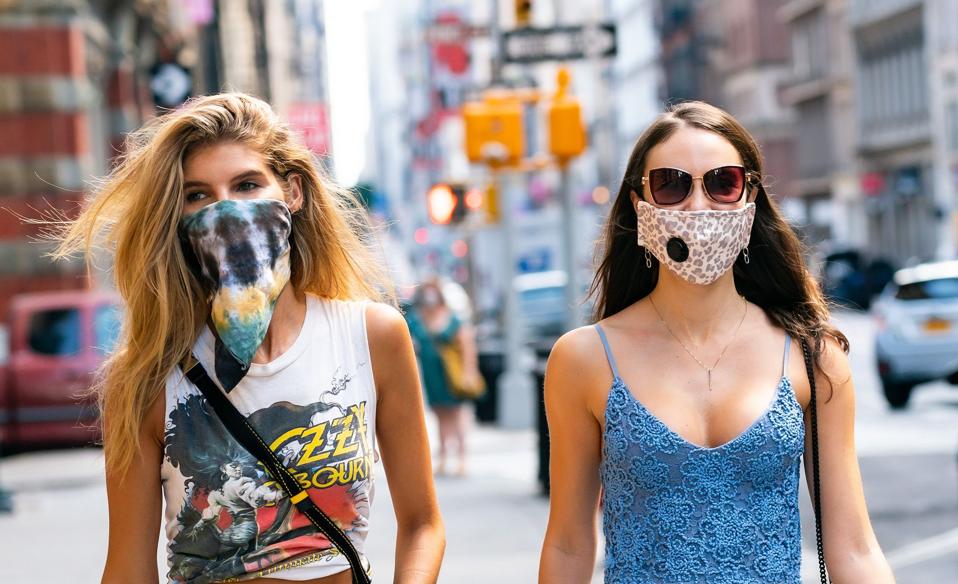 Face masks and coverings come in many different forms. But are they all the same at preventing the … [+] spread of Covid-19 coronavirus? Here Ashley Haas (L) and Heather Aboff are seen in SoHo, New York City, wearing theirs. (Photo by Gotham/GC Images)

Face masks can be like pizza, at least in certain ways.

People can end up wearing both on their faces, albeit for different reasons. Both can come in a wide variety of types and designs. And not all are created equal. Some (face masks, not pizza) are better than others at blocking droplets that may come out of your nose and mouth. In fact, some face coverings in some cases could actually make things worse, causing even more droplets to spew out into the air, according to a study just published in Science Advances.

Yes, you heard that correctly. Wearing some face coverings can be even worse than when you wear nothing at all. That isn’t quite how the song recorded by Alison Krauss goes, so how then can a face covering possibly be worse than wearing nothing but the smile on your face? Aren’t face coverings supposed to block all that stuff that comes out of your mouth and nose when you do things like cough, sneeze, talk, sing, pant, and say, “ohhh, pizza”? Aren’t face coverings supposed to help block your filthy nose and mouth from transmitting the Covid-19 coronavirus to others?

For the study, a team from Duke University (Emma P. Fischer, Martin C. Fischer, David Grass, Isaac Henrion, Warren S. Warren, and Eric Westman) created some “spitting” images of a person talking into a box. The study used freaking laser beams to do this. The laser beams created a sheet of light inside the black box in front of a hole in the box. So, essentially the experiment wasn’t just a black box.

Next, the research team asked a person to position his or her mouth at the hole and repeat the phrase, “stay healthy, people,” five times. Therefore, anything that would come of the person’s mouth, whether it’s small droplets or hot dog fragments, would subsequently hit the sheet of light, causing the light to scatter. In other words, any droplets or particles would scatter the sheet out of it. A cell phone camera filmed this sheet show, which would allow the researchers to quantify how much stuff was coming out of the person’s mouth.

The person repeated this procedure multiple times, first without any face covering and subsequently with 14 different types of face masks. The person didn’t wear all 14 masks at once, which would have looked ridiculous. Instead, the person tried them one at a time. The research team established a relative droplet count scale with a 1.0 count representing the number of droplets that hit the sheet when the person had no face covering and 0.0 representing what happened with the best mask of the bunch. Again, keep in mind that this is just a person trying just one version of each of 14 different types of masks. 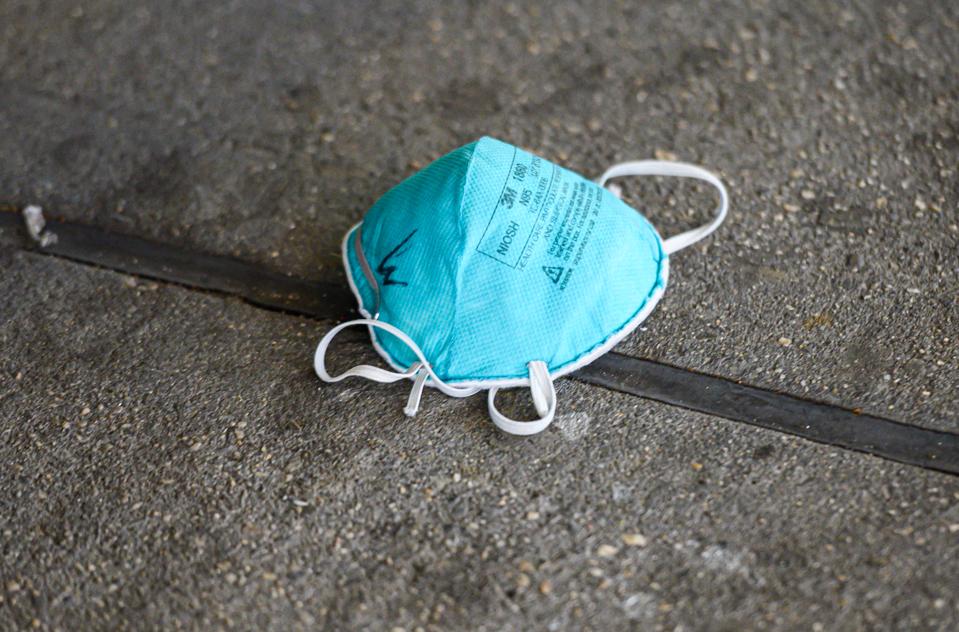 A view of an N95 face mask outside NYU Langone Health hospital during the coronavirus pandemic. … [+] (Photo by Noam Galai/Getty Images)

It should come as no surprise that the best mask was clearly the fitted N95 mask that didn’t have an exhalation valve. After all, this is what health care workers are supposed to wear, assuming that their health care facilities actually have provided enough of such protection. These masks are designed to keep droplets and viruses from going either direction, out or in, and protect both the wearer and everyone else. Experiments with this kind of mask in essence kept the sheet together with not much scatter recorded. Indeed, such masks aren’t perfect. However, they served as the standard for this experiment with a relative droplet count of basically zero. 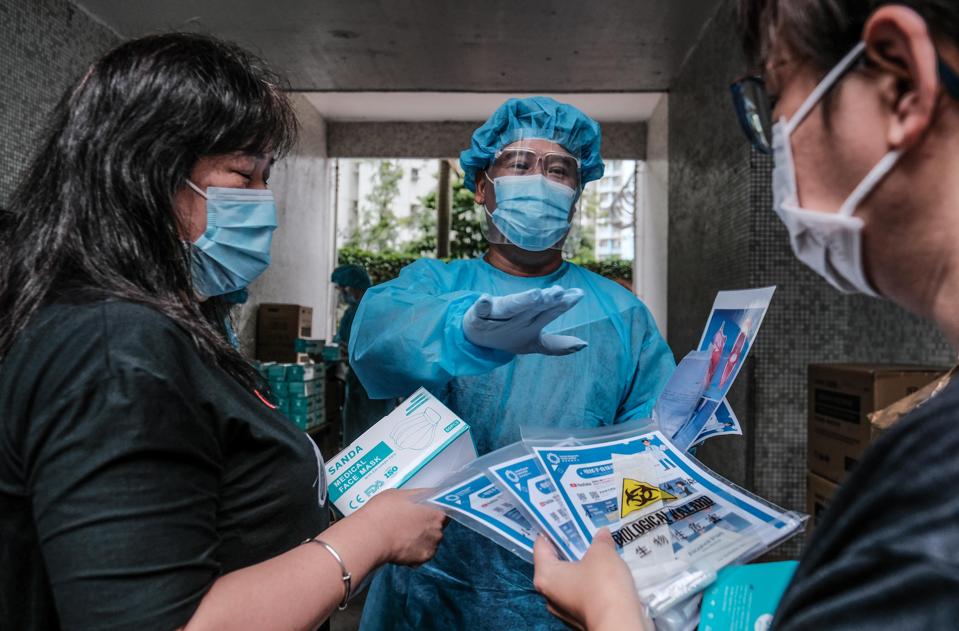 Surgical masks, like the ones seen here being worn by medical workers in Hong Kong, China, finished … [+] second in the testing. (Photo by Qin Louyue/China News Service via Getty Images)

The second place finisher was not too surprising either. Compared to the N95 mask, the three-layer surgical mask had a more variable relative droplet count that ranged from zero to 0.1. These masks are medical grade as well and can be like boxers (the underwear and not Mike Tyson). They can keep most things inside but every now and then can let something sneak outside.

The third and fourth ranking masks were the ones with polypropylene: the cotton-polypropylene-cotton mask and the 2-layer polypropylene apron mask. These had relative droplet counts around 0.1, a little bit higher than the surgical mask. 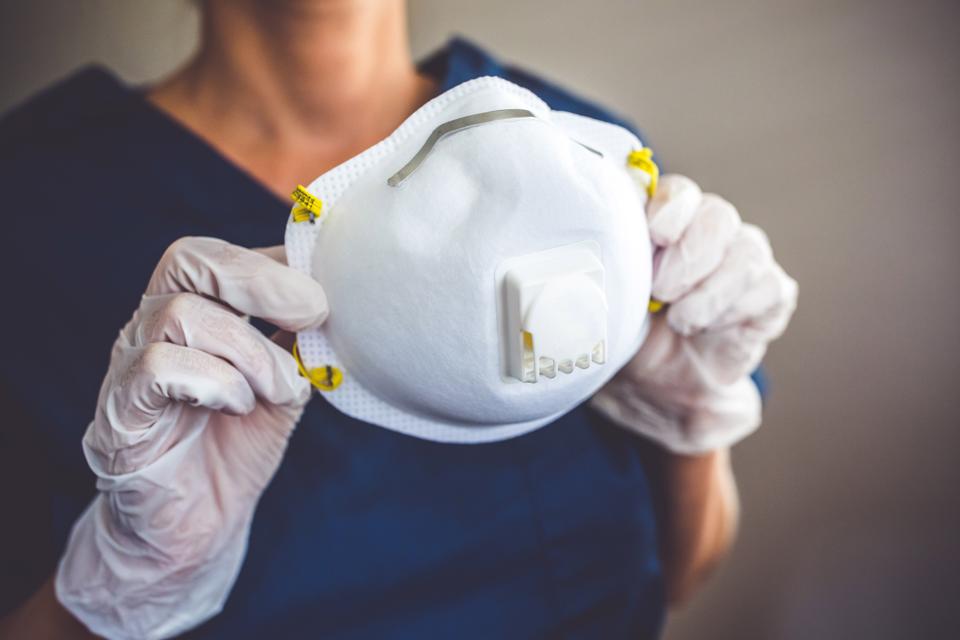 Does your N95 mask have an exhalation valve? (Photo: Getty)

Number seven was another type of N95 mask: one with an exhalation valve. This registered a relative droplet count ranging from 0.1 to 0.2. When using a N95 mask, check first whether it has an exhalation valve that bypasses the filter. A N95 mask with such a valve is a bit like those one-way see-through windows. It provides full protection only in one direction. While the mask may protect you, you can still end up exposing yourself to others. Let me re-phrase that. You can still expose others to whatever may come out of your mouth and nose.

Such a valve allows air to move from the wearer’s mouth and nose through the mask without going through the main filter. While this may make exhaling easier, at the same time, it may permit viruses to get on through to the other side. This exhalation valve may be fine if the sole purpose of the mask were to protect you from what may be in the air. An example would be working with construction materials as you are building your plaster Justin Bieber shrine. But such a mask wouldn’t protect others from you as well as a N95 mask without an exhalation valve would. That’s why health care workers don’t tend to use N95 masks with exhalation valves.

The ninth place finisher was a one-layer Maxima AT mask that had an average relative droplet count of 0.2 with its range going no higher than 0.3.

At number 12 was the knitted mask. Not surprisingly this mask had a pretty large range, going from a relative droplet count of around 0.1 to just under 0.6. A knitted mask tends to be like a politician’s speech, full of holes. And holes can let a whole lot get through to the other side.

Then there were the two masks that could actually be worse than wearing no mask at all. At number 13, the bandanna had a range of 0.2 to 1.2. This suggested that going Axl Rose on your nose and mouth could in some cases allow more droplets to get through than when going bare-nosed and bare-mouthed. How could this be? How could a bandanna create even more droplets? Well, the answer is shear reality.

Depending on its arrangement, construction, and positioning, a bandanna may actually shear larger droplets into many more smaller ones. Think about the last time you try to push a block of Parmesan cheese through a screen window (because who hasn’t tried that). Smaller droplets are worse than larger droplets because they can float in the air longer and may make it through a person’s respiratory tract more readily.

The last place finisher showed why when purchasing a face covering, you may not want to get fleeced. The fleece mask finished at number 14 on the list, worse even than wearing nothing at all. The experiments showed that you could still create quite a sheet storm while wearing the fleece mask. The average relative droplet count was 1.1. That means, on average, the person while wearing the fleece mask generated more droplets than when his or her nose and mouth were fully exposed. This may not necessarily apply to all fleece masks. Nevertheless, like the bandanna can do in some cases, this fleece mask was making big problems into many more little problems. And that’s not good.

Of course, this study was far from perfect and had numerous limitations. It didn’t test all possible versions of the different masks and how they may be worn. For example, not all N95 masks with exhalation valves and not all knitted masks or fleece masks are necessarily the same. The publication didn’t provide detailed descriptions of each mask and how each was worn. Moreover, who knows what might have happened had different people with facial shapes and ways of speaking worn the masks.

Additionally, spraying droplets doesn’t necessarily mean that you are spraying viruses. Each droplet may not contain enough of the severe acute respiratory syndrome coronavirus 2 (SARS-CoV2) to infect others. And certainly “stay healthy, people,” is not the only thing that you may be saying around other people. What would happen, for example, if you were to say something like “it is what it is”? So take all of the study’s findings with a mask-full of salt.

Nonetheless, all of this is a reminder that public health recommendations have their nuances and associated detail. It’s not enough just to cover your face. Covering your face with sweat, chocolate, pizza sauce, or shame won’t suffice. And using just any mask won’t do. For example, don’t show up at a Costco wearing a Lone Ranger mask or a mask that doesn’t really block what’s coming out of your nose and mouth. Even when you are seemingly covering your nose and mouth, you may not be adequately protecting others. Therefore, be careful when choosing and purchasing a mask. Choose the right face covering. After all, you wouldn’t say, “just bring me some pizza, any kind of pizza,” would you?

Full coverage and live updates on the Coronavirus