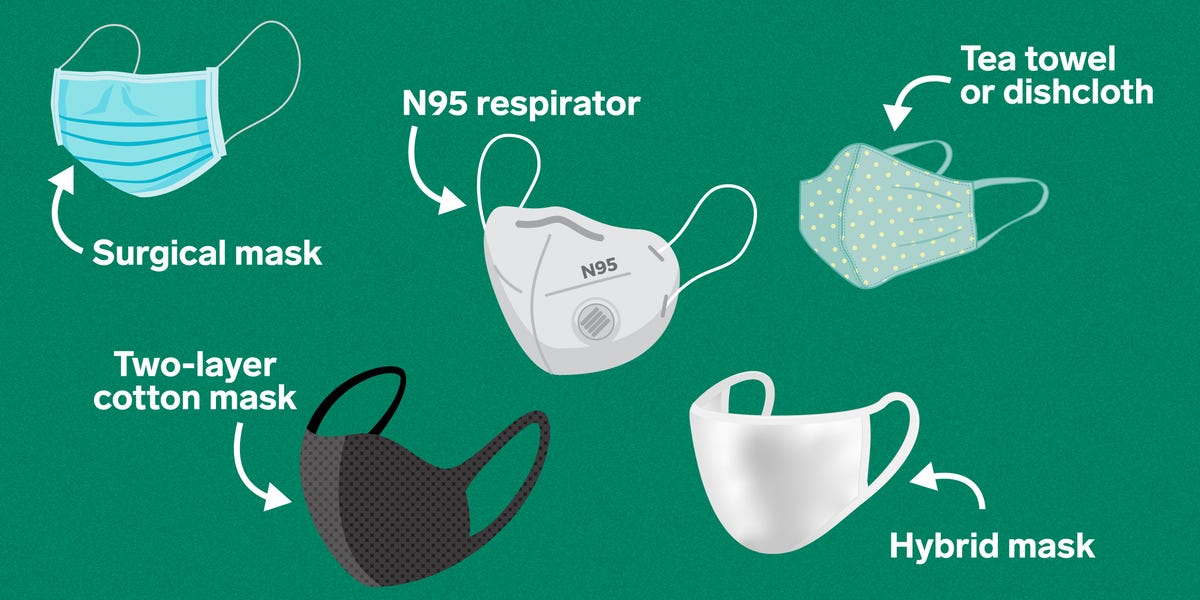 A simple trick can reveal whether your face mask offers sufficient protection: Try blowing out a candle while wearing it. A good mask should prevent you from extinguishing the flame.

The rule isn’t foolproof, but it should help weed out masks that aren’t very protective.

The Centers for Disease Control and Prevention recommends multi-layer cloth masks for the general public. The ideal mask blocks both large respiratory droplets from coughs or sneezes — the primary method by which people pass the virus to others — along with smaller airborne particles called aerosols, which are produced when people talk or exhale.

It should be sealed around the nose and mouth, since any gaps, holes, or vents could allow droplets to leak out and infect another person.

Assuming masks are worn properly, certain materials consistently perform better than others in studies. Based on current research, here’s a ranking of the best and worst face coverings: 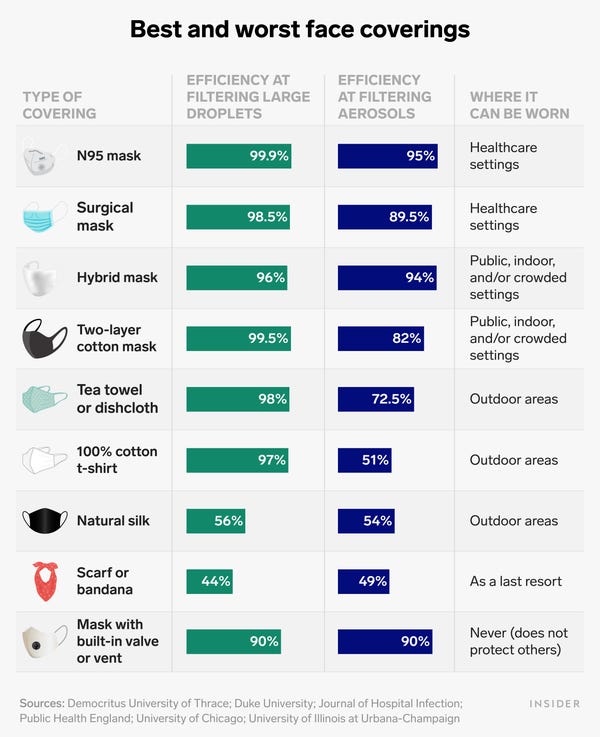 In addition to protecting those around you, masks can also offer protection for the wearer, according to the CDC’s recent guidelines.

‘Hybrid’ masks are among the safest homemade options

As a general rule, mask fabrics should be woven as tightly as possible. Fabrics with higher thread counts are better at filtering particles.

It’s also preferable to have more than one layer. The World Health Organization recommends that fabric masks have three layers: an inner layer that absorbs, a middle layer that filters, and an outer layer made from a nonabsorbent material like polyester.

N95 masks are the most protective because they seal tightly around the nose and mouth so that few viral particles seep in or out. They also contain tangled fibers to filter airborne pathogens — the name refers to their minimum 95% efficiency at filtering aerosols. A Duke study showed that less than 0.1% of droplets were transmitted through an N95 mask while the wearer was speaking.

That’s why they’re generally reserved for healthcare workers. But the Food and Drug Administration has also approved some KN95 and FFP2 masks made in China and Europe that offer comparable protection.

Disposable surgical masks are also made of non-woven fabric. A 2013 study found that surgical masks were about three times as effective at blocking influenza aerosols as homemade face masks. (That was true, at least, when air flow was slower than a cough but faster than a human breathing during light work.) 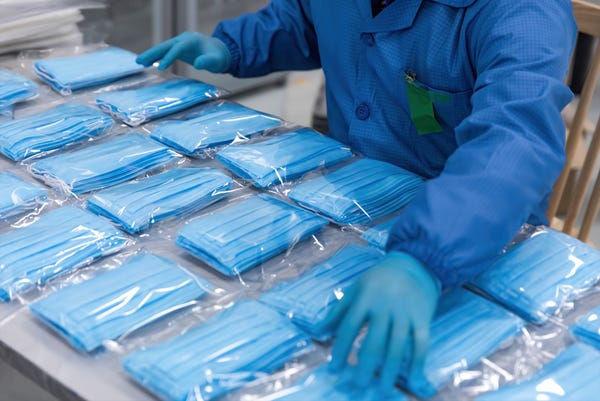 Still, there are homemade options that come close to the level of protection of an N95 or a surgical mask.

An April study from the University of Chicago determined that “hybrid” masks — combining two layers of 600-thread-count cotton paired with another material like silk, chiffon, or flannel — filtered at least 94% of small particles (less than 300 nanometers) and at least 96% of larger particles (bigger than 300 nanometers). Two layers of 600-thread-count cotton offer a similar level of protection against larger particles, but they weren’t as effective at filtering aerosols.

That study, however, conducted measurements at low air-flow rates, so the masks might offer less protection against a cough or a sneeze. Still, using multiple layers of high-thread-count cotton is preferable to face coverings made from a single dishcloth or cotton T-shirt.

“A cotton mask offers far less protection than a surgical mask,” Scott Gottlieb, the former head of the FDA, wrote in The Wall Street Journal. “If a cloth mask is all you can find, buy a thick one.”

Fabrics like silk and cotton have more variable performances

A June study published in the Journal of Hospital Infection found that masks made from vacuum-cleaner bags were among the most effective alternatives to surgical masks, followed by masks made from tea towels, pillowcases, silk, and 100% cotton T-shirts, respectively. 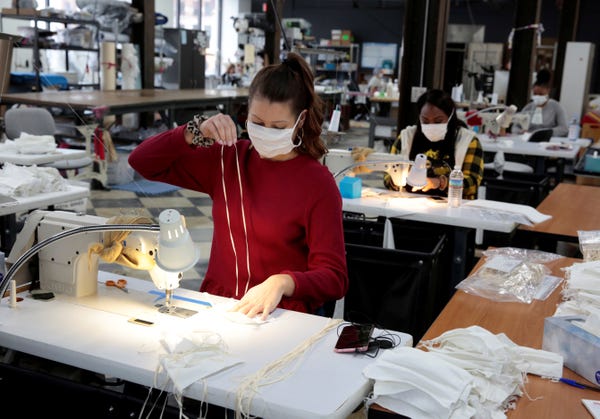 Research from the University of Illinois, meanwhile, found that a brand-new dishcloth was slightly more effective than a used cotton T-shirt at filtering droplets when a person coughed, sneezed, or talked. That study also found that a used shirt made of silk was more effective at filtering high-momentum droplets, most likely because silk has electrostatic properties that can help trap smaller viral particles. 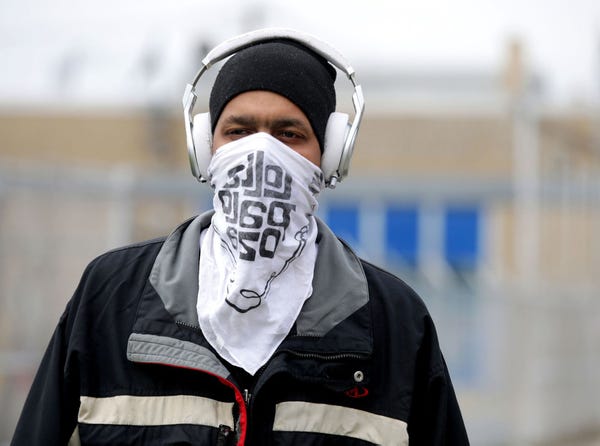 Bandanas and scarves have performed poorly in multiple studies.

Similarly, the Duke researchers found that bandanas reduced the rate of droplet transmission by a factor of two, which makes them less protective than most other materials.

For the most part, though, any mask is better than no mask, with one notable exception: The CDC cautions people not to wear masks with built-in valves or vents.

Masks with one-way valves can expel infectious particles into the surrounding air.

Mask studies should be taken with a grain of salt

Though research has coalesced around the idea that a few types of masks offer the best protection, it’s not always easy to simulate how a mask performs in real life.

While some tests mimic the size of coronavirus particles, others evaluate performance based on viruses like influenza. Researchers also still aren’t sure about the price degree to which the virus gets transmitted via aerosols, since th particles are hard to trap and study without killing the virus. The generally accepted dividing line between a droplet and an aerosol is a width of 5 microns, roughly the size of a dust particle. But many experts think the delineation is arbitrary.

Various studies also test masks under different circumstances: Some mimic the heavy air flow produced when a person coughs, while others mimic the air flow when a person is talking or breathing normally.

Then of course, masks will perform differently depending on how they’re worn. That’s why it’s better to stick with more protection over less.